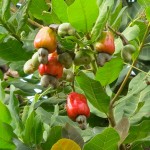 The cashew is native to South America and the Caribbean, in an area stretching from southern Mexico to Peru, and from Brazil and the West Indies. French naturalist André Thévet first observed the cashew apple being eaten by the Amazonian Tupi Indians in Brazil in 1588. In the sixteenth century, the cashew began to proliferate and was cultivated by the Portuguese and Spanish as colonisation took them around the world. The Spanish took the cashew to the Philippines and Central America, while during the same period the Portuguese took it to Africa.

Due to the nature of its root system, the tree is very effective at preventing soil erosion; it was often planted for this purpose as well as for the cultivation of its fruit and nuts. Cultivation of the cashew spread to many areas which had appropriate climatic and soil conditions: from South America to Mozambique in Africa, then to India and South-East Asia.

International trade in cashew nuts began in the 1920s. The first known commercial cashew nut producer was Roch Victoria, a Sri Lankan entrepreneur operating in India. The first recorded exports of cashew nuts were by the ‘Indian Nut Company’, which processed nuts locally for export in tea chests to the United States of America. Tin packaging replaced tea chests, and in the 1950s the system of vacuum sealing tins with CO2 was developed to help prevent breakage and contamination. Once the cashew nut industry was established, demand for cashew nuts grew rapidly and the roles of producers, exporters, brokers, importers and consumers were established.

World production of the cashew nut today is as active in these historically important geographic areas as it is in the regions in which it has proliferated. These also offer good climatic and other conditions for production. This in turn provides a vital economic benefit for producers and the local economy alike. Cashew growers vary in size from small family-owned orchards to large plantations.

The cashew tree is of economic importance not simply because of the edible nature of the nut kernel but also for the other economic benefits that can be derived from the tree: the wood can be used for construction (it is particularly valued for boat construction); the bark can be used to produce natural dye; the apple can be both consumed as a fruit and used to produce sweets, preserves and juice; the shell of the nut contains Cashew Nut Shell Liquid (CNSL), which is used in many industrial products such as paints, varnishes, lubricants and pesticides; and many parts of the tree can be used for medicinal purposes. 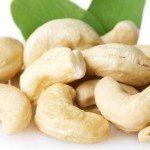 Cashew trees require a tropical or subtropical climate to grow; they are relatively drought resistant and prefer well-drained sandy soils. The trees have a large canopy to maximise yield. They flower in winter and are pollinated by insects. After pollination, fruit develops in around 8 weeks.

Cashews fall when ripe, so trees are kept short and the ground beneath them must be kept clear. Each picker can collect up to 50kg of nuts per day at the height of the season. In dry climates the nuts can remain on the ground for up to 2 weeks, but in humid climates the nuts must be collected frequently.

Cashew nuts are shelled to remove the kernels, which are then dried, graded and packaged for onward export and processing.

Along with fruits and vegetables, cashew nuts should be eaten regularly as part of a healthy diet. A 30 gram serving of around 15 cashew nuts eaten either as a snack or in a range of savoury or sweet recipes is a good way to start incorporating cashew nuts into a healthy diet.

The health and nutritional benefits of cashew nuts are many:

The nutrient content of Cashew nuts (per 100g of nuts):